Once you have created the first configuration of your basic Docker stack, it is time to move the Symfony’s files into Docker’s web server service.

This will make us able to run the symfony application from inside the web server container, getting the real benefits of using a system as Docker (same environment on any machine, above all).

So, we need a way to move in the container all the files required to make our project run.

How do we do this?

The answer to our question is a really simple word: “Dockerfile” (never heard of it? Ok, it is a not so simple word! But it is simple to use it anyway! 🙂 )

From the Docker documentation about “Dockerfile”:

A Dockerfile is a text document that contains all the commands a user could call on the command line to assemble an image.

So, basically, all what you write in the console to configure your environment has to be put in a Dockerfile to automate the process.

Anytime someone wants to configure the environment to run our app, (s)he will not have to take care of the details as they are all in the Dockerfile: easy and fast!

So, let’s prepare our app to use Dockerfiles.

Create the folder structure and the Dockerfile

First of all we need to create some folders. 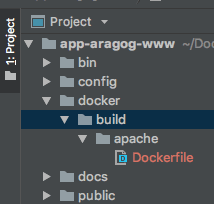 The next steps are:

As first thing, instruct the Dockerfile about the Apache image we want to use:

The httpd:2.4 is exactly the same we used in our docker-compose.yaml file.

Now, edit the docker-compose.yaml file so it will use this Dockerfile: we will do this using the build key node:

As you can see, the php and mysql containers are skipped as they use an image, while the apache container is built as it uses a Dockerfile.

Try to start the containers with docker-compose up -d: 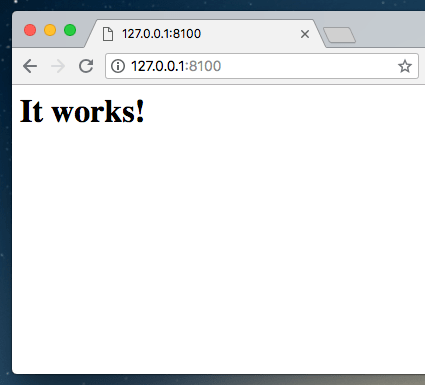 Ok, the first step is done: the Apache web server is continuing to work also if we are using a different method to configure it.

Now we need to do the second step: add the Symfony files to the document root of Apache.

To do this, we first need to understand what is the Docker Context as it will be extremely useful.

The Docker Context: what is it, why we need to understand it and how to use it

Before diving in the files and their copy in the container, we need to understand what is Docker Context.

From the documentation about build:

The docker build command builds Docker images from a Dockerfile and a “context”.

A build’s context is the set of files located in the specified PATH or URL.

The build process can refer to any of the files in the context.

For example, your build can use a COPY instruction to reference a file in the context.

So, to copy our Symfony files to the container, we need to make them available in the context.

We are using a docker-compose.yaml file, so we need to understand how to specify the context when using it.

The solution? The context key of the build node.

Either a path to a directory containing a Dockerfile, or a url to a git repository.

When the value supplied is a relative path, it is interpreted as relative to the location of the Compose file.

This directory is also the build context that is sent to the Docker daemon.

But there is more: we can also set a specific Dockerfile to use when setting the context.

This is useful as because

So, trying to recap what we have read until now in the documentation:

Interesting, isn’t it? Let’s put all those information at work to understand how to copy our Symfony files to the Apache container.

As usual, we will start small.

Trying to copy only a single file test.txt

First, we need a file to copy: create an empty file called test.txt and put it in the root directory of the project: we will try to copy it in the container. 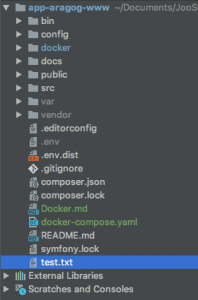 Now, let’s edit our docker-compose.yaml file to specify the desired context and Dockerfile:

As you can see, we removed the path to the apache folder and, instead, added two more keys:

This has two effects:

Before this modification, instead, the context was the folder docker/build/apache (and so we were able to copy only files and folders in that folder) and the Dockerfile was found thanks to the auto-discovery capabilities of Docker in finding Dockerfiles in the provided paths.

Now that we have our entire root folder in the Docker Context, edit the Dockerfile that builds Apache to make it able to copy the file test.txt:

We are using the COPY instruction.

As the context is our root folder, we simply use the file name test.txt and copy it to the container as copied-test.txt.

As usual, php and mysql are skipped, BUT apache has now two steps, and the second one is exactly the COPY instruction.

Let’s see if the file was really copied.

First, recreate the containers running the up command:

Then enter the container (use docker ps to find the ID of the apache container) and list the files in it:

BINGO! Our test.txt file is there with the name copied-test.txt!

Now that we can use the context to copy files in the container from it, we are ready to further explore the copying of Symfony files to the container.

Moving Symfony’s files into the container

This will move the entire context (that is our entire root folder) in the creating container.

WARNING: This is not the best way of doing this. For the moment we make simple things, so it is ok to copy the entire root folder.
Later in this series of posts, we will learn how to refine the files copied in the container to speed up and optimize the process.

For the moment, let’s try this quick and dirty solution.

Edit the docker/build/apache/Dockerfile, adding the above instruction:

And update the running ones:

Now enter the container and check if the files are in it:

Are they there? Very good! We have just moved all the Symfony’s files in the container! 🙂

The message “It works!”? What’s happening?

What are you seeing? What, the content of the php file, not interpreted but instead served as a simple text file? ?

What is damn happening? ?

Technically, we have just created our stack and it works because we are able to make up and running our containers with Apache and MySQL (PHP currently doesn’t work, in fact you have never seen it when running docker ps!).

And it works because we can see the Symfony’s index.php content.

So, technically it is working, practically it isn’t as we are not able to serve the php files as interpreted webpages.

Why does this happen?

As you can see we are building three containers: one for php, one for mysql and one for apache.

Leaving apart for the moment the container for mysql, let’s examine deeper what we are doing with php and apache containers.

We already know that the php container doesn’t work and never starts nor is built: maybe it is time to understand why!

To build php and apache we are using two images:

So, the question at this point is: what happens when we build these images?

The first thing we know is that the php container is skipped. When running docker-compose build, in fact, we can read a clear message:

The second thing we know is that the php container is never run: using docker ps, in fact, we have never seen it in the list:

So, in the end, we have this situation:

Let’s see what these images do.

A Docker image is nothing more than a Dockerfile with some instructions to build a container.

You can read more about images and layers here.

The relvant part is this:

A Docker image is built up from a series of layers. Each layer represents an instruction in the image’s Dockerfile. Each layer except the very last one is read-only.

Each layer is only a set of differences from the layer before it. The layers are stacked on top of each other. When you create a new container, you add a new writable layer on top of the underlying layers. This layer is often called the “container layer”. All changes made to the running container, such as writing new files, modifying existing files, and deleting files, are written to this thin writable container layer. The diagram below shows a container based on the Ubuntu 15.04 image.

And this is the representation of what you’ve read until now:

But from where these images come?

From the Docker Hub!

And here they are:

If your read it, there is a section called “How to use this image.” that states this:

This image only contains Apache httpd with the defaults from upstream. There is no PHP installed, but it should not be hard to extend. On the other hand, if you just want PHP with Apache httpd see the PHP image and look at the -apache tags.

It is clear, now?

Our service doesn’t interpret PHP files because using the image httpd simply we don’t have it!

So, bascially, we are using the wrong image ?.

Let’s use the right one!

Configuring an Apache web server with PHP (for real!)

So, we need to use the the php image: and this is what we were already using.

But reading the description from the httpd image, it is not sufficient to use the image php:7.2 like we did: we need to use an image tagged with -apache!

So, go to the php image page on Docker Hub.

If you read the page, there is a section called “With Apache” that says:

More commonly, you will probably want to run PHP in conjunction with Apache httpd. Conveniently, there’s a version of the PHP container that’s packaged with the Apache web server.

And the instructions say that we need to use the image php:7.2-apache: very very well ?

So, what happened was this:

So, what we need to do now is:

This is the resulting docker-compose.yaml file:

Concretely, we have renamed apache to php and changed the path to the Dockerfile: nothing really complex.

We also need to change the folder in which we move the files of our app as per documentation:

Where src/ is the directory containing all your PHP code.

So, in the file docker/build/php/Dockerfile, we need to change the FROM instruction to use the image php:7.2-apache:

Last thing to do is building the image: 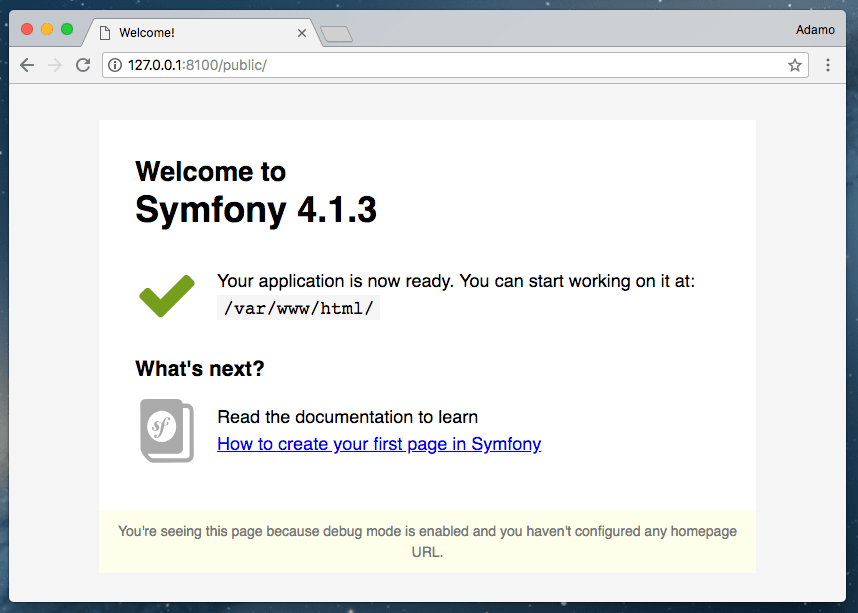 We are now ready to start building our Symfony based app… or maybe we aren’t?

Conclusions and next steps

But for the moment we have reached some great goals:

Those are a lot of things and we are closer to our goal of fully using Symfony on Docker!

The next post will teach you how to solve the problems I mentioned.

In the meantime, remember to “Make. Ideas. Happen.”.

I wish you flocking users!

We are proud of

Star us on GitHub

Are we helping you?